MIKU EXPO 2016 was Miku Hatsune's second tour in North America. First announced in seven cities, the tour quickly expanded to 14 concerts in ten cities in Canada, Mexico, and the United States in two months. The North American tour became the biggest tour ever for Hatsune Miku.

This article is mainly an English adaptation of this blog post on the official Hatsune Miku blog.

After the West Coast, the tour moved to The Bomb Factory in Dallas for their first concert of two in the State of the Lone Star. The venue had a capacity of over 4200. The organizer was surprised to learn the show was sold out. The fans told they were waiting for the event for a while.

At The Bomb Factory, they usually place a plate signed by the artist that played there on the wall. MIKU EXPO is no exception. 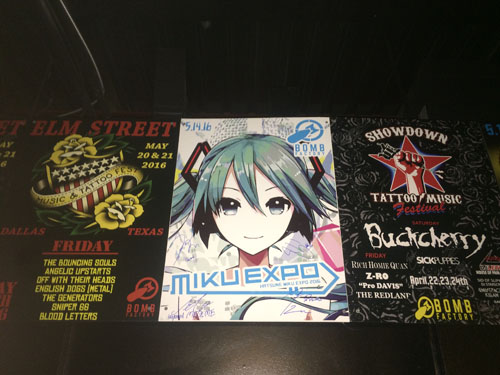 The fifth concert was at the NRG Arena in Houston. Being an arena, the venue was the most convenient up to date for families and there were many children in the audience. During the encore, Takahiro Misawa (Guitar), MEG.ME (Keyboard), Luke Devito (Drum) and James (Bass) from Anamanaguchi formed an improvised band and played together. The Let's Draw contest continued in Austin, Houston, and Dallas.

Next was the concert at the Sony Centre in Toronto whose tickets sold quickly. The event felt much more Japanese-like compared to the previous ones. The surrounding area seemed moved by the MIKU EXPO attracting more visitors than usual. "At first, we did not know anything about Miku Hatsune and we did not know where to start with the promotion of this event but working together with the fans for advertising was really interesting." said the promoter of the event in Toronto with a smile. This tour caught the feeling of the fans where it goes. The day after the concert, there was a video festival and, an autograph session and a Q&A with the representative of Crypton Future Media.

"I remember well. At that time the queue at the goods stand was quite long. We made sure to prepare four stands this time." an old man at the venue said when asked about the previous show in 2014. "This is a good thing they came back after two years. We were looking forward to it."

The concert in New York was the last concert of the Tour in the East Coast. We will share with you the last part of the report soon.